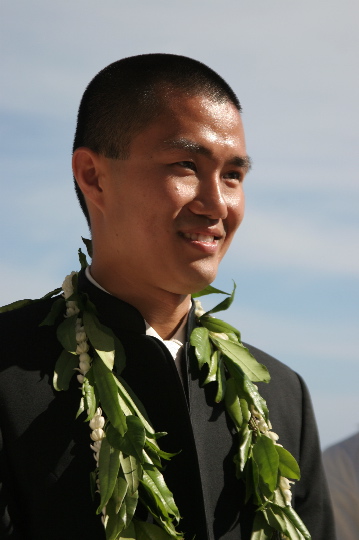 ...happily about to get married...

September, 2005.
Greetings from San Francisco. It's been an eventful year. I married my soulmate Elizabeth, and life has dropped us off in the Bay area. While she works on her ob/gyn residency at Stanford hospital, I'm a Miller Fellow at UC Berkeley, a title that doesn't do justice to the best position a young researcher could possibly hold. The Miller Institute gives me complete freedom to pursue theoretical statistical mechanics without any requirements to satisfy funding agencies, write grants or serve on committees. "It's not a postdoc. It's a Miller Fellowship." if you watch HBO.

When I'm not thinking about the statistics of trajectories through phase space, I'm training for a marathon in October. It's completely addictive, as running for hours and hours at aerobic pace produces more natural drugs than a coca field in Columbia. The high lasts all the time, not just while running. Now I understand why people do marathon after marathon. I've also started roasting coffee beans in a $9 popcorn popper, the next step in my fascination with espresso. It's amazingly simple, and espresso from freshly roasted beans just bursts with flavors and aromas. After perfecting the roasting aspect, I plan to develop my own espresso blend.

November, 2005.
Currently, I'm living a very sweet life in Santa Barbara, California where I get paid to do theoretical statistical mechanics at UCSB. Yes, I appreciate how beautiful the ocean is every morning when I take my walk. Life here is really as good as you might think, except that my wonderful fiance Elizabeth still lives in the Bay area. We hope to rectify that soon, since we're getting married. When I'm not trying to solve problems in polymer physics, I spend my time working out, making frequent trips to the Bay area, attempting to make the perfect cup of coffee on a limited budget and enjoying downtown Santa Barbara.

...if anyone really cares. I was actually born in Shanghai, China, on March 4, 1977, at 1:45 am local time. My poor, poor mother had to deal with horrible delivery pains because of my large cranium. I moved to the United States with my parents when I was 3. After a brief stay in Wisconsin, we moved to West Chester, Pennsylvania, where I spent my formative years. My parents both worked as computer programmers and provided a very good life for me. They instilled in me the attitude that hard work can accomplish anything.

Perhaps the most influential experience of my life was attending Rice University in Houston, Texas. (I was at Will Rice College.) There are two reasons. Firstly, Rice challenged me academically, too much so at first. I survived though, and my education at Rice provided a solid foundation for my future scholarly work. Secondly, I had the chance to interact with diverse and interesting classmates. It's always wonderful to see old classmates at reunions and weddings and find out where people have traveled, what people are reading, how far along people have come in their careers, etc. Oh, and we have school pride. You should have seen us after we won the 2003 College World Series!!

At Rice, I became interested in theory after a thermodynamics class with Marc Robert. He opened my eyes to statistical mechanics by mentioning topics such as the renormalization group and Onsager's exact solution to the 2D Ising model. Around this same time, I realized I didn't have the patience to do laboratory work, so I ditched my BS for a BA in Chemical Engineering (yes, you can do that at Rice; what a great school) and took math courses instead.

After graduating from Rice in 1999, I ventured on to Stanford for graduate school in Chemical Engineering. Stanford was a wonderful place for me both academically and socially. For my thesis, I worked with Hans Andersen, a fantastic, fantastic advisor. We worked on some interesting and important problems in the kinetic theory of liquids. Also during this time, I met my wife Elizabeth. While I picked up some popular Bay area activities such as wine tastings and road biking, I also started doing less common things such as deep frying turkeys and making turduckens (a chicken stuffed in a duck stuffed in a turkey with layers of stuffing between each; absolutely fantastic).